Undelete 360 is a powerful data recovery tool due to its feature set which includes things such as the ability to preview files before recovery and its targeted recovery feature which can help to cut down on the time it takes to recover files. Stay tuned to find out more about Undelete 360 and what we liked and didn’t like about the software.

TL:DR; Undelete 360 is a simple tool that will help you to recover files with just the free version. You’ll have to pay for an upgrade if you want more advanced functionality. If you do choose to opt for a paid version, your license will be a lifetime one, meaning that you will never have to worry about paying for upgrades to the software.

Want to help make our content better? Please vote for the best alternative to Undelete 360:

Undelete 360 is a data recovery application developed by File Recover Ltd. It’s available for Windows operating systems. File Recovery Ltd. is a Microsoft partner as well, which means that they have access to the latest technical information from Microsoft about their new technologies.

This allows them to provide the highest level of compliance with Microsoft’s demanding requirements. Here are  some of Undelete 360’s more important specifications:

We will now take a closer look at Undelete 360’s capabilities.

After Undelete 360 has discovered files that can potentially be recovered, it will display them according to their file type. For example, music files will be grouped together. 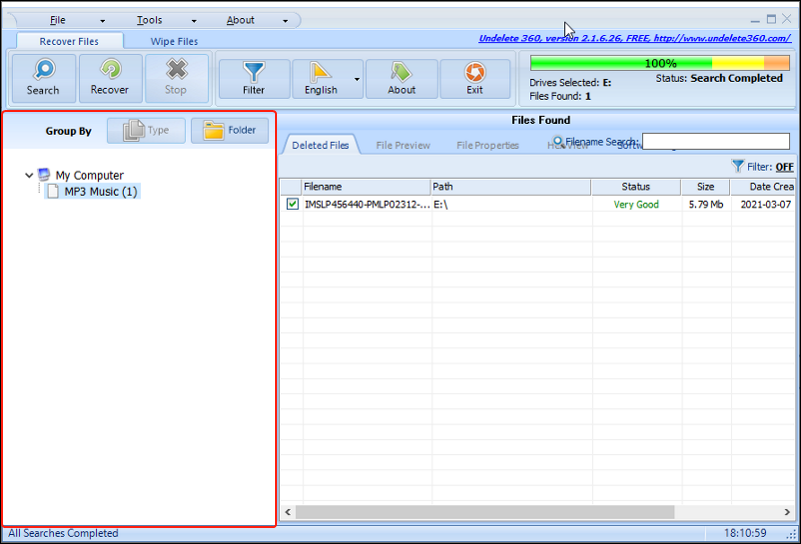 Unfortunately, not all files can be recovered. The likelihood of being able to recover a file is decreased if the disk is written to before recovery is attempted. Thankfully, Undelete 360 has a status bar that alerts users to the condition of potentially recoverable files.

If there is a high probability of a file being recovered, its status will show up as Very Good. If the file has been overwritten, then the status will be Overwritten. 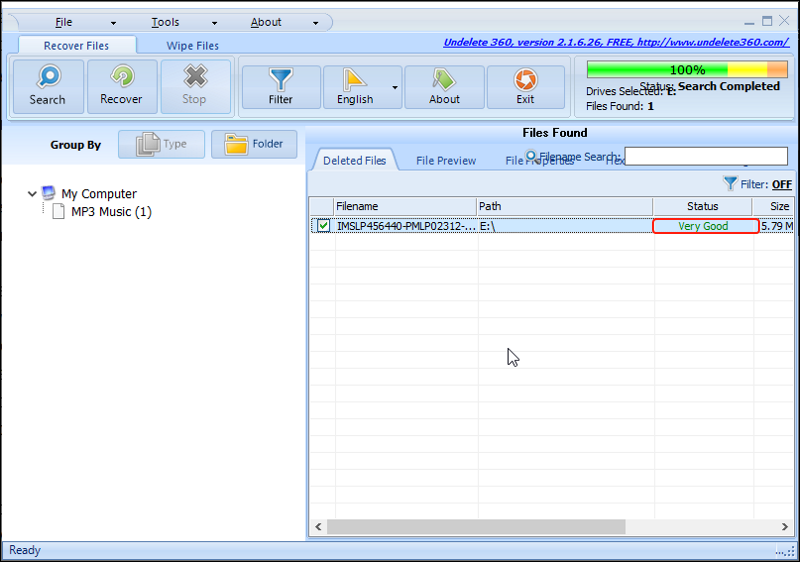 The paid version of Undelete 360 includes an option that ensures that files can’t be recovered. Data recovery software exploits the fact that files are not actually instantly deleted. However, this can be used against us.

This poses a security risk since files can be recovered by anyone who has access to your device and who has the knowledge of how to recover files. This is especially of concern if you’re selling your computer to someone else. It’s best to have any traces of your data completely erased.

Here, we’ll show you step by step how the data recovery process in Undelete 360 works.

The interface of Undelete 360 is quite simple. This isn’t a bad thing; we’re just mentioning this so that you know what to expect when you open the app for the first time. For this example, we’ll be trying to recover a deleted audio file from an SD card.

To start the process of searching for files that you want to recover, start by selecting the Search option in the top left-hand corner of the app window. 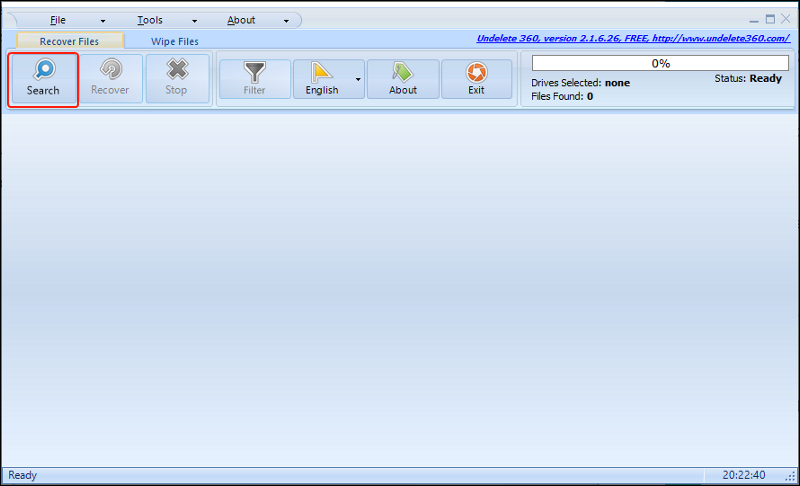 After selecting Search, you will need to select the storage medium that you want to attempt recovery from. In our case, this is PICFRAME (E:).

After selecting your storage medium, you can go ahead and click Start to get the scanning process started.

3. Browse files for the one(s) you’re looking for

After the scan has been completed, you will see a list of recoverable files. The scan results window will display information such as the status of the file (how likely it is that you’ll be able to recover it) and the file size. 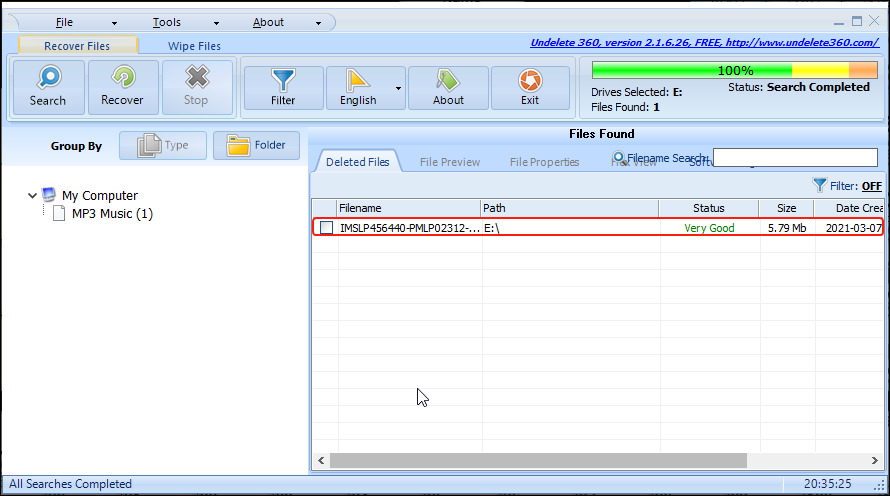 To recover the files that you chose, simply click on them and then hit the recover button.

After clicking on Recover, you will have to choose the location that you want to save your recovered files to. During this step, you’ll also have the option of selecting other options such as keeping the folder structure. These are only available in the paid version of Undelete 360. 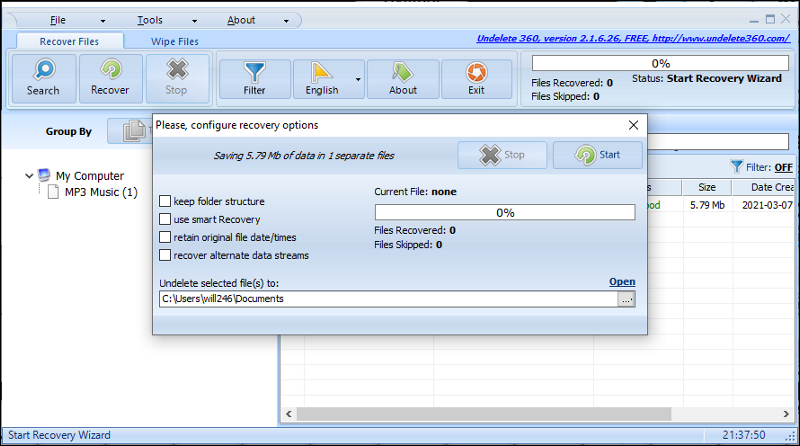 Both paid packages include a lifetime activation license.

One of the best things about Undelete 360 is that you get the core functionality for free. However, by paying a fee, you can get access to more advanced functionality. One thing to note is that this software hasn’t been updated since 2016.

Seemingly related to this is the confusion involved in finding the option for downloading the paid versions of the program. We had to do a Google search to find the right page to go to. Below, we will examine the paid packages that are available and what they have to offer.

Both paid packages will give you access to the following features:

The Professional version of Undelete 360 gives access to all of the features above. However, this version is limited to restoring files greater than 10MB in size. Users can also choose to upgrade to the ultimate version later for $34.

The Ultimate version gives you access to everything the professional and free versions have to offer in addition to not being limited to restoring files greater than 10MB in size.

What Users Are Saying About Undelete 360

Part of determining if recovery software is good is considering the opinions of others. Here’s what some other review sites had to say about Undelete 360:

Techspot says: “Undelete 360 is one of the best programs to use for restoring accidentally or unintentionally deleted files from your computer, regardless of storage medium.”

Softpedia says: “We haven’t encountered any issues during our tests and highly recommend Undelete 360 to all users.”

Cnet says: “Of course, there are no guarantees your data can be recovered, or that it will be completely intact. But Undelete 360 proved capable of recovering accidently or recently deleted data.”

That’s all well and good, but what about the individual users?

amnesia9301 on Cnet says: “Lots of programs can recover deleted data, and lots claim to be free. All of the others that I downloaded had restrictions on the amount of data that could be recovered – between 500MB and 2GB – not much use on a 16GB card. Very happy with 360!”

The reviews on CNET were in fact mostly positive but there were some complaints about customer service.

Pros and Cons of Undelete 360

What is the price of undelete 360?

If I stop an Undelete 360 scan will it show what it found?

Yes, even if you stop an Undelete 360 scan prematurely, it will display a list of items that are potentially recoverable, based on the portion of the storage media it has already scanned.

Undelete 360 is safe.  Its developer, File Recovery Ltd. is a Microsoft partner and maintains high safety standards because of this. However, make sure to restore files to a different storage media from the one you’re scanning. This will prevent the overwriting of files that you potentially want to recover in the first place.

Is Undelete 360 available for Android?

Undelete 360 isn’t available for Android. However, you can attach an Android phone to your Windows computer as a storage medium and scan it that way.

Is there a portable version of Undelete 360?

Unfortunately, there isn’t a portable version of Undelete 360.

Undelete 360 is a solid piece of software. It doesn’t have many frills but it works. You’ll be able to successfully recover files even with the free version. It works with several different file types and types of storage media as well.

While it does offer more advanced functionality, such as the ability to filter results and the ability to permanently wipe files, be aware that these features are only available if you purchase the paid version. In any case, for most simple cases of data recovery, Undelete 360 will be able to successfully do the job.

William has been fiddling with tech for as long as he remembers. This naturally transitioned into helping friends with their tech problems and then into tech blogging and blogging about data recovery.