Have you lost your valuable OBS recordings because of accidental deletion, unexpected crash, or the recordings corrupted? You need to stay calm and read through the following methods of recovering the OBS recordings.

Before we get into more details on how exactly you can recover deleted OBS recordings, we want you to know that we’ll start by assuming you have already tried the primary methods of data recovery available on Windows 10, such as checking your recycle bin and checking for possible backups. The next part of the article will talk about permanently deleted OBS recordings.

Where Does OBS Studio Save Recordings

By default, OBS Studio will save your recordings to your video folder in your main documents section. The fastest way to access this location is by clicking File – Show Recordings. 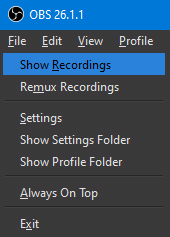 You can easily set a custom Recording Path (the location where your recordings are saved).

Here are the steps you will need to take:

OBS does not keep ‘backup’ recordings or buffers; it only saves the file that’s being recorded. In case your saved OBS recordings have been accidentally deleted or the storage device formatted, there is only one reliable method to recover the deleted OBS recordings – using a data recovery software solution.

There are numerous tools that can recover deleted video files. This software ranges from overly simple to complex. One such app is Disk Drill Data Recovery, a tool that we have used for quite a while and has an incredibly high success rate with video recovery.

You can study our Disk Drill’s review yourself and determine whether you want to use it to recover your permanently deleted files.

Disk Drill Pro has proven to be a very reliable tool for recovering files, and it is also easy to use. It can recover lost and deleted videos in almost all video file formats, including .flv and .mp4.

Let’s take a look at how you can recover deleted OBS files in Windows:

Important: Do not attempt to recover video files to the same drive  you are recovering from to avoid overwriting.

➡️ Why does OBS record in FLV?

FLV is the default option of recording format as it is more resistant to crashes. MP4 files need to be closed out to work correctly. If something goes wrong and the MP4 file is not properly closed out, you lose every frame of that file, and there’s an excellent chance it will become completely unrecoverable. While the MP4 file may be corrupted and unrecoverable in case of a crash, the FLV does not need to be closed out to be usable.

➡️ How to make OBS record in mp4

There are several recording options you can choose from with OBS, two of the most common are the .flv file type or the .mp4 file type.

To change the file extension for the path to MP4, you will need to go to Settings > Broadcast Settings. For example, if you’re saving to C:\Video.flv, if you want your recordings to be saved as MP4, all you need to do is change it to C:\Video.mp4.

Another way to select MP4 file extension can be easily accomplished by following the below steps: 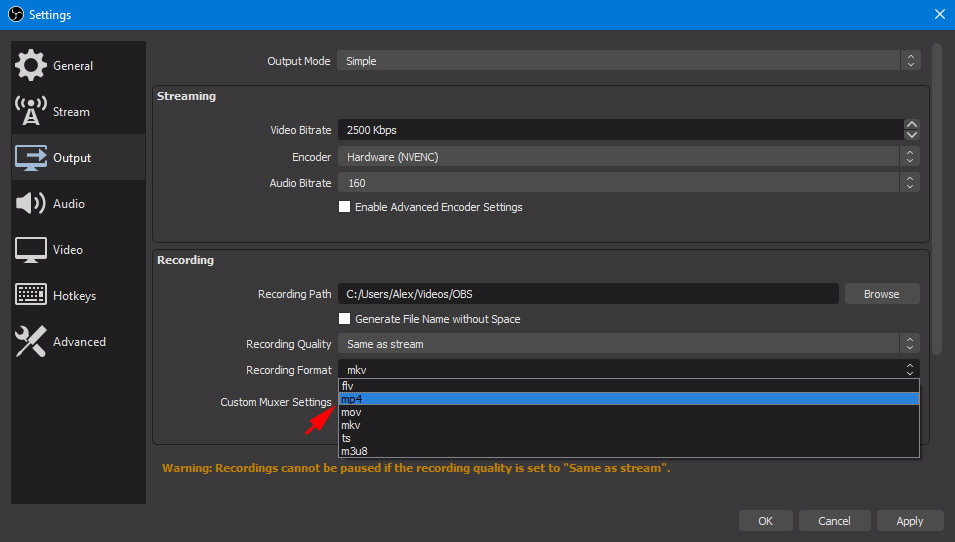 When facing the OBS stuck on stopping recording issue, you will notice that the OBS software won’t be able to stop the recording process and will get stuck on the Encoding overloaded error.

If the encoding gets overloaded, it means your computer hardware cannot handle the video production maybe because your CPU and GPU are overloaded and can’t encode as fast as you need. Trying to record a video with high standards like 4K resolution and over-60 fps could also be the cause for this error.

In case the encoding is overloaded, your computer will stop the video creation. Even though the OBS recording is still running, the GPU and CPU will completely stop the outputting.

As a result, if you press the Stop Recording button, OBS will prompt you to the sign of an Encoding overloaded error. It will not be able to stop the recording as technically; it is not yet complete; the video is only halfway done.

If this is the case, you will not be able to retrieve that video. The only option you have is to shut down the OBS process. If you attempt to restart a screen recording directly with any optimization, the OBS Encoding Overloaded error will pop up again.

How to Troubleshoot the OBS “Encoding Overloaded” issue:

➡️ My OBS recording is corrupted

You will not be able to open or repair the corrupted OBS file using data recovery software. Instead, you will have to use specialized video repair software.

Have you tried to record videos with OBS and save them as MP4 just to realize when you finished the whole recording process that your file won’t play? If this is the case, OBS had probably crashed before the MP4 had finished saving, thus corrupting the file.

Changing the container format to FLV should not change the file size; however, the remux process will just take the raw encoded video and audio data and put it into a different container format. By choosing FLV, in case of a crash, the recording will just stop, and you will be able to play the recording up to the point where the crash happened.

Another reason why you might not be able to play your OBS recording is that your media player does not support those file formats or you don’t have the right pack of codecs.

Codecs are computer programs that can encode or decode audio and video files. While most video players have their own self contained codec packs others might require an additional codec set. If you are wondering which codec pack to use, K-Lite Basic or Combined Community Codec Pack (CCCP) are two of the most popular.

I did not save my OBS recording, any chance to recover it?

The answer to this question depends on the file output type you have been using. Recordings done in an mp4 file format are unable to be recovered if something happens due to the particular container structure.

.flv and .mkv do not have this problem, as these are designed as streaming media containers. If you want to be on the safe side, you should probably set the output format to .flv and convert it to .mp4 once the recording has finished. The .flv file will work even if the OBS software has crashed, as their container structure enables the video to end at any point.

My OBS recording disappeared. How can I find it?

You can find OBS Studio recordings by selecting File> Show Recordings; however, the output path can be changed under Settings > Output.

OBS won’t move or delete any of your existing recordings unless you change some of its default settings.

If the video recording is not available in the specified folder, you can try recovering it. If you have a backup of your OBS recording, you should be able to restore it quickly. The process is quite straightforward; you can follow these steps:

In addition to this method, you can use the global search by file format to look for the missing OBS recording.

OBS crashed while recording, are there any chances to recover the recording?

Roxana Raducanu is a seasoned technical writer with 10+ years of experience writing for startups and Fortune 500s alike. She is a copywriter with a special affinity for technical content; and a love for words, and SEO; a tech enthusiast, following the latest trends related to digital marketing, hardware, software, Artificial Intelligence, blockchain, cryptocurrencies, and new technologies.

Newer post
How to Recover Deleted Videos From an iPhone: 5 Proven Methods for 2022