There are many reasons why Samsung phones (such as the powerful Samsung Galaxy S9/S8/S7/S6/S5/S4 or the affordable Samsung Galaxy J2/J3/J7) are loved by avid photographers. One of these reasons is the availability of multiple native photo recovery methods, which can be used to recover deleted photos from Samsung with just a few taps on the screen.

Pro tip: Most of the Samsung photo recovery methods described in this article work only for a limited amount of time from the initial data loss incident. As such, you should begin the recovery process as soon as possible and avoid using your Samsung phone or tablet until you get your photos back.

How to Recover Deleted Photos from Samsung Phones

Let’s take a look at five methods that you can use to recover deleted photos from any Samsung phone or tablet regardless of if they’ve been accidentally deleted a few minutes ago or became permanently lost due to user error or mechanical damage.

To recover deleted photos from the Samsung Gallery Recycle bin:

You can restore multiple photos at once by tapping and holding a photo and then choosing all other photos you want to undelete.

Photos that are no longer present in the Samsung Recycle bin can often still be undeleted using data recovery software. Such software can analyze your mobile phone’s internal storage space and find permanently deleted photos that haven’t been overwritten yet.

Most data recovery software applications require root permissions to deliver the best results and, in some cases, work at all. These days, rooting an Android phone is a fairly straightforward process, but it will void your warranty and introduce certain security risks, so do your research before you go ahead with it.

Data recovery software can be divided into two broad categories: desktop (Windows and macOS) and mobile (Android). Applications that belong in the first category, such as Disk Drill and EaseUS MobiSaver for Android, almost always deliver superior data recovery results, but they rarely work without root.

We’ve managed to get our hands on an exclusive Disk Drill PRO discount code that let’s you take 40% off your purchase at CleverFiles. Just enter “DD40-ANDROID” at checkout or follow this link.

On the other hand, native Android data recovery apps, such as DiskDigger, can be installed directly from the Google Play Store and used even without root. However, their recovery performance on non-rooted devices is severely limited.

You can avoid rooting your Samsung phone by recovering photos directly from the microSD card. Just note that the photos you want to recover may be stored inside the phone’s internal memory and not on the microSD card.

Samsung users can backup important data to Samsung Cloud, a cloud storage platform that offers 5 GB of free storage space to all new users. When Samsung Cloud backup is enabled, all photos in the Gallery are automatically transferred to Samsung’s servers, from which they can be easily restored even if the phone on which they were originally stored gets run over by a truck.

If you’re still missing important photos, there’s a chance that you’ve accidentally deleted them without even realizing it. Fortunately, Samsung Cloud has its own trash folder. To retrieve them from it, go to Settings > Accounts and backup > Samsung Cloud > Gallery > Trash. Select your photos and tap Restore.

Deleted photos remain in the Samsung Cloud’s trash folder only for 15 days.

Even though Google will no longer offer free unlimited storage space for compressed photos starting June 1, 2021, Google Photos will most likely remain the most popular Android photo sharing and storage service simply because it’s readily available to everyone with a Google account.

If you’re among the 1 billion or so users who rely on the service to keep important memories safely backed up on Google’s servers, then you can follow the instructions below to recover all permanently deleted photos using any phone—not just the one they were stored on originally.

Google Photos has a special folder for deleted photos, called Bin, and you can access it by tapping Library at the bottom and selecting the Bin option. To restore a photo from the Bin, touch and hold the photo you want to restore and then tap Restore at the bottom.

Keep in mind that deleted photos stay in the Bin only for up to 60 days or until the Bin is emptied, depending on what comes first. 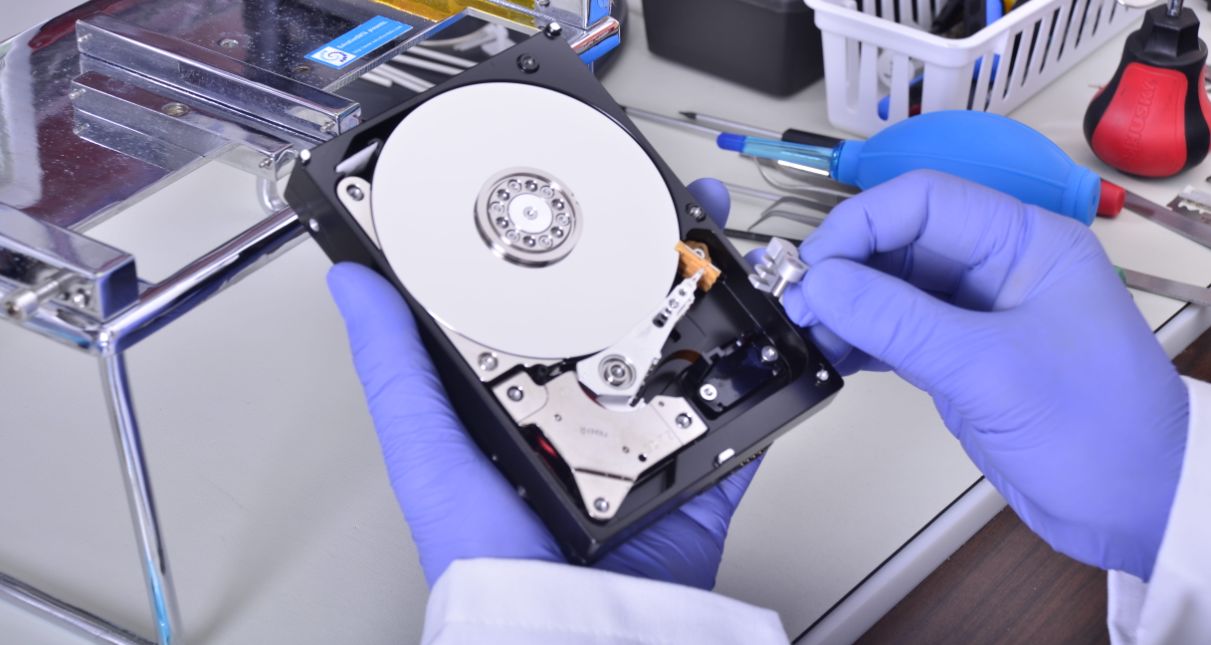 Unfortunately, not all lost photos can be recovered at home. For example, it’s virtually impossible for regular Samsung users to retrieve important photos that are not stored in the cloud from a broken or water-damaged Samsung phone.

In such situations, your best option is a professional data recovery service. Yes, sending your phone to professionals equipped with specialized tools that allow them to retrieve data directly from flash memory chips can be expensive, but the only other option is permanent data loss.

The good news is that there are many excellent data recovery services that offer a free evaluation and charge their customers only when they successfully recover lost data.

What is the best software to recover deleted photos on Samsung?

How to recover deleted photos from a lost Samsung phone?

Cloud backup services like Samsung Cloud or Google Photos make it possible to recover photos that were stored on a Samsung phone from any computer, tablet, or phone.

How to recover data from a Samsung Galaxy Note with a broken screen?

If you have a Samsung Galaxy Note with a screen so broken that you can’t properly use the phone anymore, then you can connect it to a computer and transfer your photos from the internal memory and SD card to a hard drive or external storage device.

As a Samsung user, you can choose from several effective methods whenever you need to recover deleted photos. In this article, we’ve described five such methods and explained when each of them should be used. All that’s left for you to do is start the recovery process as soon as possible, follow our instructions, and make sure to be more careful next time.

David Morelo is a professional content writer in the technology niche who joined the Handy Recovery team in 2019 and has since made an invaluable contribution to the quantity and quality of our materials. David's main principle is not to start working on a new article until he has studied the subject backwards and forwards.